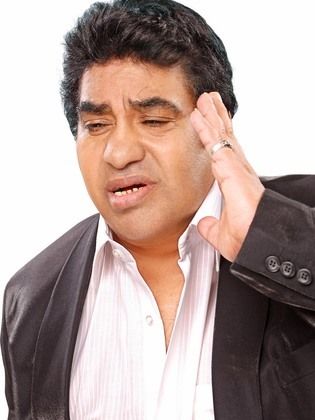 Ahmed Mohamed Morsy was born in the governorate of al-Minya. His father was a livestock trader in al-Minya and he was the second to last of his father’s fourteen children. Ahmed married in 1976 and he has a daughter and a son. His son Mohamed is also a folk musician. Ahmed began...Read more singing in 1969 at the al-Alatiyah café on Mohamed ‘Aly street. He was famous by 1972 and performed at weddings and parties. Mohamed sang at the wedding of musician Sharifa Fadel, an occaision which was attended by a number of artists and journalists. Also in attendance was the owner of the Larizona casino who offered Ahmed the opportunity to work at his casino. Thereafter Ahmed recorded two records for the “Sawt al-Houb” recording company – fame followed. Among the musician’s best known songs are “al-Sah al-Dah Ambo”, “Zahma ya Donya Zahma” (“Crowds”), “Seeb wa Ana Aseeb” (“Let Go and I Will Too”). Mohamed also contributed songs to film titles and even performed comedy roles. However he was not successful as an actor as it would seem that singing is his main talent. At the beginning of the nineties Ahmed was involved in an accident that almost cost him his life. He was paralyzed for a period and retreated from the public stage so that he could recuperate. Ahmed has lately began making minor appearances and has redistributed some of his older song titles in addition to performing alongside youthful performers presenting folk songs. In this manner he has performed jointly with Lebanese musician Ramy al-‘Ayash and the two presented the song “al-Nas Rayqah” (“The People are Laid Back”) which was well received by the majority of audiences. Despite ‘Adawiyah’s retreat from stardom twenty years ago following his accident he is still regarded as a folk music giant in Egypt. No one has thus far succeeded in replicating the success which saw him stand out in the seventies and eighties of the previous century.