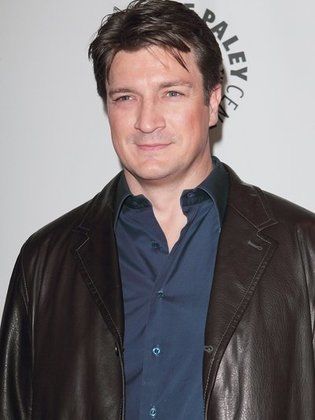 Nathan Fillion is a Canadian actor who was born in Alberta, Canada on March 27, in 1971. His parents, Cookie and Bob Fillion are both retired teachers. Nathan got his education by attending Holy Trinity Catholic High School, Concordia University College of Alberta and University...Read more of Alberta. He started working in improv theater including “Theatresports with Rapid Fire”, followed by the TV movie “Ordeal in the Arctic”. At the age of 23, he moved to New York City to pursue his acting career. Fillion’s first regular role was in “One Life to Live” which got nominated for a “Daytime Emmy Award” in 1996. In the late 1990s he had a small role in the Oscar-nominated movie “Saving Private Ryan”, as well as a minor appearance in “Blast from the Past”. The actor’s role in the 1998 TV series “Two Guys, a Girl and a Pizza” was his breakthrough, as he appeared in 60 episodes of the show. After 3 years of appearing on the series, he had receieved positive reviews and was critically acclaimed. When he was cast as Captain Reynolds in “Firefly”, he gained a huge cult of fans. A few years after the show ended, he reprized his role as Captain Reynolds in the 2005 movie “Serenity”. In the following years, the Canadian took various lead roles, including the horror-comedy “Slither”, “Waitress” and “Trucker”. Nathan was also cast as Dr. Adam Mayfair in the 4th season of ABC’s “Desperate Housewives” in 2004. When Fillion was 37, he got his first singing part in “Dr. Horrible’s Sing-Along Blog”. But what gave him the fame and reputation he has today was his lead role in the 2009 TV series “Castle”, winning him four “People’s Choice Awards” for favorite TV actor. Fillion has also had numerous roles as a voice actor, including “Monsters University”, “American Dad!” and “Wonder Woman”.