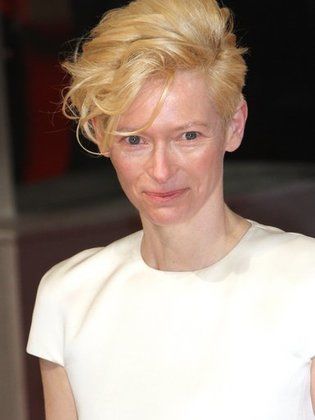 Tilda Swinton, a Scottish actress, born in aristocratic military family, received her education in English at boarding Scottish school. Tilda studied social and political science at Cambridge University and graduated in 1983 with a degree in English literature. During her time as...Read more a student, she performed countless stage productions and proceeded to work for one season at the "Royal Shakespeare Company", whoever when it came to the arts, she is a rebel, she left the company after a year as her approach shifted dramatically, she found some sincere in the gender-bending roles that come her way, such as the composer Mozart in Pushkin's "Mozart and Salieri", and as a working class woman impersonating her dead husband during World War II, in Karges' Screenplay: Man to Man: Another Night of Rubbish on the Telly (1992). In 1985 the pale-skinned, carrot-topped actress began a professional association with gay experimental director Derek Jarman. She continued to live and work with Jarman for nine years, developing seven critically famous movies. Their collaboration would produce stark turns with several movies, such as turner-prize nominated Caravaggio (1986), The Last of England (1987), The Garden (1990), Edward II (1991), and Wittgenstein (1993). Director Jarman died due to complications from AIDS in 1994, leaving devastating void in Tilda's life for long period of time. Her most notable performance of that period comes from a non-Jarman movie, such as her role in Orlando (1992), her nobleman character who lives for 400 years while changing sex from man to woman. The movie, which Swinton spent years helping writer and director Sally Potter to develop and finance, continues to this day to have a devoted fan base around the world . Over the years she has preferred art to celebrity, opening to experimental projects with new and untried directors and actors, entering into the worlds of installation art and cutting-edge fashion. She consistently shows interests in roles that represent powerful characters, such as her roles in the movies: Female Perversions (1996), Love Is the Devil: Study for a Portrait of Francis Bacon (1998), Teknolust (2002), Young Adam (2003), Broken Flowers (2005) and Béla Tarr's. Since the birth of her twins in 1997, she has successfully moved between working in the field of art-house and quality Hollywood blockbusters. The movie "The Deep End (2001)" earned her a number of critic's awards and awarded her the first Golden Globe nomination. Such mainstream U.S. pictures as The Beach (2000) with Leonardo DiCaprio, fantasy epic Constantine (2005) with Keanu Reeves, her Oscar-decorated performance in Michael Clayton (2007) alongside George Clooney and of course her iconic White Witch in The Chronicles of Narnia: The Lion, the Witch and the Wardrobe (2005) have made one of the cinema's most outstanding women.