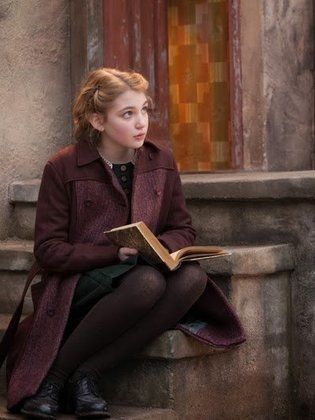 Sophie Nélisse was born in Windsor, Ontario, Canada and moved with her family to Montreal, Quebec at the age of four. Her mother, Pauline Belhumeur, resigned from her school teacher job in 2013 to become the talent manager to both her daughters, Nelisse and Isabelle. Being fluent...Read more in both English and French, Nelisse portrayed acclaimed roles in English and French films. In 2011, Nélisse starred in the Canadian-French drama film, Monsieur Lazhar (2011), about an Algerian refugee in Montreal who steps in to teach at an elementary school after the former full-time teacher commits suicide. She won two awards for this film: 1- Academy of Canadian Cinema and Television Award for Best Performance by an Actress in a Supporting Role. 2- Jutra Award for Best Supporting Actress. Jutra Award is a Canadian film award presented annually by Quebec Cinema in memory of the influential director, Claud Jutra. Nélisse had joined a talent agency only to financially support her gymnastic training for the 2016 Olympics when she got her part in The Book Thief (2013). She received four accolades for her role: 1- Young Artist Award for Best Leading Young Actress in a Feature Film. 2- Phoenix Film Critics Society for Best Performance by a Youth in a Leading or Supporting Role—Female. 3- Hollywood Film Award Spotlight Award. 4- Satellite Awards for Best Breakthrough Performance. After this award recognition of her talents as an actress, she decided to shift her career into acting. Nélisse portrayed roles in films like Pawn Sacrifice (2014), Endorphine (2015) which showedin the Vanguard section of the 2015 Toronto International Film Festival. She starred in Mean Dreams (2016) that was chosen for Cannes Film Festival's Directors' Fortnight. She also starred in the drama films, 1:54 (2016); Wait till Helen Comes (2016) in which she co-starred with her sister, Isabelle; and Exode (2017) that premiered at Cannes Film Festival in the “Not Short on Talent” section. In 2017, Nélisse starred in the French-Canadian drama film, Worst Case, We Get Married (2017) which was awarded Winner of the VIFF "Vancouver Women in Film and Television Artistic Merit Award". In 2019, she starred in the action thriller film, Close (2019 ), and the survival horror film, 47 Meters Down: Uncaged. Nélisse played roles in television series like, Les Parents (2011-16), Vertige (2012) and Demain des hommes (2017).