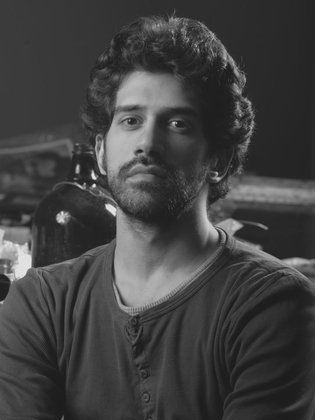 Ahmed Magdy graduated from the law faculty at ‘Ain Shams University but did not work as a lawyer. Rather Magdy joined the al-Tamy theater troupe and worked as an actor, assistant director and actor trainer for many performances over a period of three years. His first film was the...Read more independent six-minute 2007 documentary work “Magra al-Seil” (“Riverbed”). Thereafter Magdy took part in a workshop titled “al-Zatt wa al-Madina – al-Qahira” (“The Self and the City- Cairo”) which was produced by the European Union and al-Sammat production company which saw the direction of a 9 minute documentary work titled “Zeezo”. Magdy also joined the Cairo Jesuit Cinema School for a year and directed three low budget short titles. Magdy has taken part as an actor or assistant cameraman in more than 30 independent works. He was also in the 10 minute narrative film work “Keika Sagheera” (“Small Cake”). The title was his graduation project that was submitted to the workshop and received an honor from the judging committee at the Algeria Independent Cinema Festival. Magdy’s final work as a director was “Illa al-Bahr…” (“To the Sea…”), the title was produced by the Forced Migration and Refugee Studies department at the American University in Cairo. Magdy also participated as an actor in “’Asafeer al-Neel” (“Birds of the Nile”). That title also starred Fathy ‘Abd Al Wahab and was directed by Magdy Ahmed ‘Aly. The work was adapted from a literature work by the same name which was authored by the renowned writer Ibrahim Aslan.