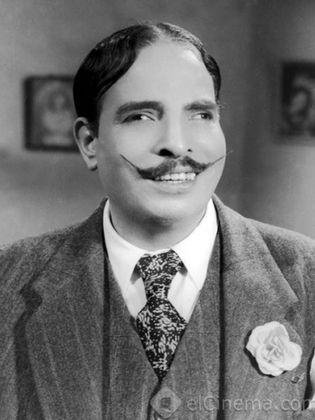 Abdul Fattaah al-Kasry is an Egyptian actor who was born in Cairo to a rich father working a gold merchant. He loved acting since he was a child; he studied in a French school. His acting debut was when joined Abdul Rahmaan Roushdy troupe in 1920, then he played famous stage...Read more roles with Esmaeel Yasseen troupe and made a great success that led filmmakers to give comic roles. He excelled in the role of the typical illiterate in the following films; “Shamshoum & Lebleb”, “Al-aanessa Hanafy i.e. Miss Hanafy”, “Ebn Hameedo” where his famous words were copied by Egyptians. Al-Kasry also staged many successful plays, among them are; “Kesmety i.e. My fate”, “30 yowm fel-seg-n i.e. 30 days in jail”, “Hassan, Morcos and Kohen” and “Al-geneih al-Masry i.e. The Egyptian Pound”. He became blind at the end of his life and suffered a loss of memory.